We gladly support the intense efforts of Callias Foundation and the Silk Road Symphony Orchestra to bring the necessary intensity into two complimentary ideas: the Silk Road Cultural Belt – a Narrative for Europe – and the definitively positiv and independent idea of a European Silk Road as introduced by Dr. Mario Holzner, Philipp Heimberger & Artem Kochnev.

The study concludes that Europe should respond to China’s New Silk Road initiative with a coherent infrastructure network and transport strategy of its own to leverage its economic potential. It should not rely on China’s Belt and Road Initiative (BRI) to achieve this, but invest itself to ensure that it suits European priorities. Nevertheless, a ‘European Silk Road’ can be seen as complementary to China’s efforts. The study finds that the development of a European Silk Road could create 2-7 million new jobs and could increase GDP on average by 3.5% in Wider Europe over a ten-year period. Eastern Europe in particular needs an upgrading of its transport infrastructure. If this is achieved, the boost to incomes and living standards would be particularly significant in that part of the continent, as a ‘big push’ in transport infrastructure investment has the potential to industrialise broad sectors of the economy. 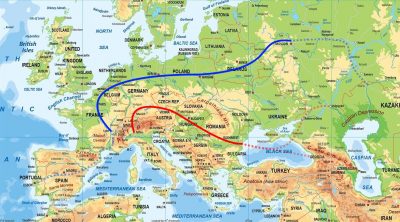 You are welcome to join the public & open Facebook-Group #EuropeanSilkRoad

This is something amazing we would like to share with you: The first fully blockchain driven music platform with a digital ecosystem where artists get paid the next day with ‘Notes’ – a ‘Token’ based on the cryptocurrency ‘Ethereum’. The Silk Road Symphony Orchestra is one of the first orchestras on this platform and the first orchestra which […]